This is an open-access article distributed under the terms of the Creative Commons Attribution Non-Commercial License (http://creativecommons.org/licenses/by-nc/4.0) which permits unrestricted non-commercial use, distribution, and reproduction in any medium, provided the original work is properly cited.

ABSTRACT
The inner ear is a complex and delicate structure composed of the cochlea and the vestibular system. To maintain normal auditory function, strict homeostasis of the inner ear is needed. A proper immune response against infection, thus, is crucial. Also, since excessive immune reaction can easily damage the normal architecture within the inner ear, the immune response should be fine regulated. The exact mechanism how the inner ear’s immune response, specifically the innate immunity, is regulated was unknown. Recently, we reported a protein selectively localized in the inner ear during bacterial infection, named cochlin, as a possible mediator of such regulation. In this review, the immunological function of cochlin and the mechanism behind its role within inner ear immunity is summarized. Cochlin regulates innate immunity by physically entrapping pathogens within scala tympani and recruiting innate immune cells. Such mechanism enables efficient removal of pathogen while preserving the normal inner ear structure from inflammatory damage.
Keywords: Cochlin, LCCL, Immune regulation, Infection, Inner ear immunity

The inner ear is a complex and delicate structure comprising the cochlea and the vestibular system. The cochlea, which enables hearing in humans, must be maintained in a strict homeostasis to function (1). Several congenital and acquired defects in the cochlea cause hearing loss (2-4). Although the incidence does not frequently occur, infective disorders, e.g. otitis media, labyrinthitis, can irreversibly damage the core auditory structure, named the organ of Corti, and cause life-long hearing loss (5). A proper immune response against infection, thus, is crucial for preserving the auditory function. The inner ear had long been considered an ‘immune-privileged’ structure with the eyes and brain. However, recent studies revealed that immune cells, specifically macrophages, are within the mesenchymal region of the cochlea, namely the stria vascularis and the spiral ligament in the lateral wall (6-8). Such immunity can thus protect the inner ear from pathogens as well as from the endogenous toxins. However, since excessive immune reaction can easily damage the normal archi-tecture within the inner ear, the immune response should be fine regulated. Recently, we reported a protein selectively localized in the inner ear during bacterial infection, named cochlin, as a possible mediator of such regulation (8). In this review, the immunological function of cochlin and the mechanism behind its role within the inner ear immunity are summarized.

Cochlin, as implied by its name, is abundantly expressed in the cochlea and the vestibule of the inner ear; additionally, in the lymphoid organs including the lymph and spleen (9, 10). Robertson . reported the novel gene, which encodes cochlin, and its selective expression in the inner ear of humans. They also found that the mutation of the gene is linked with the DFNA9 syndrome, an autosomal-dominant disease of the ear that causes late-onset neurosensory degeneration of the inner ear (9, 10). Such association with the hereditary hearing disorder and its selective expression led to a speculation that cochlin may play a critical role in auditory function.

The structure of cochlin is divided into two parts, the LCCL domain at the N-terminus and the two vWFA domains at the other end (Fig. 1) (10). The LCCL domain, commonly present in the Factor C, cochlin and lgl1 protein, comprises multiple beta strands and an alpha helix (11). The functional role of this domain had been postulated by researchers that it may be related to the LPS-binding of the Factor C protein (11, 12). However, Py . found that LCCL domain serves as a regulator of the innate immunity and its function is not restricted to the LPS (13). Additionally, most of the mutations linked with DFNA9 syndrome were found in the LCCL domain, implying its defensive role in auditory preservation (11). The vWFA domain mediates cochlin’s adhesion with different components of the extracellular matrix (ECM) (14). Specifically, a previous study found that cochlin binds to the collagen bundle within the B-cell zone of the spleen via vWFA domains (13). 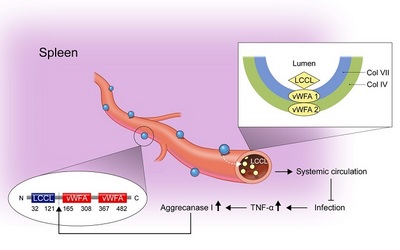 Figure 1. The LCCL domain is cleaved from the splenic cochlin and secreted into the blood during infection. Cochlin comprises the LCCL domain at the N-terminus and the two vWFA domains at the C-terminus. The follicular dendritic cells in the spleen and the lymph nodes produce and secrete cochlin in the extracellular matrix called a conduit. Here, the vWFA domains bind with the collagen cores of the conduits making cochlins to stock within the conduits. During infection, the LCCL domain is cleaved from the intact cochlin by aggrecanse 1 and secreted into the systemic circulation. The cleaved LCCL modulates innate immune response assisting bacterial clearance.

The two parts of cochlin are cleaved by a member of the metalloprotease family, named aggrecanase 1 (8, 13). Py . showed that the expression of gene encoding aggrecanase 1 is upregulated following the LPS injection in the spleen (13). Likewise, we showed the up-regulation of gene in cochlea after the PAO1 infection (8). This cleavage enables the liberation of cleaved LCCL domain and initiates the subsequent immune responses. Since the mutated cochlin in DFNA9 patients showed reduced susceptibility to cleavage (15), this implies that the cleavage is the crucial step for cochlin function.

Previous research illuminated the role of splenic cochlin as the mediator of innate immunity (13). The study found that cochlin was specifically secreted by the follicular dendritic cells within the spleen and was stored in the surrounding ECM called a conduit. As a response to (PA) infection, the expression of aggrecanase 1 increased and resulted in cleavage of the LCCL from the cochlin. The LCCL domain was then secreted into the blood and mediated the activity of innate immune cells. Until recently, the exact mechanism how the LCCL domain regulates innate immunity was unclear. However, the defect of innate immunity shown in Coch(−/−) mice highly suggested cochlin’s essential role in the immune system (13). Additionally, considering the selective expression of cochlin in the inner ear and the fact that the inner ear is separated from the systemic circulation by the blood-labyrinthine barrier (16), cochlin’s specific role within the inner ear remained a core question to be solved. Therefore, further study regarding the physiology behind LCCL domain’s action, especially within the inner ear, was required.

We showed that the baseline auditory function between the wild type mice and Coch knock-out mice did not differ significantly (8). However, following the PA infection, the Coch knock-out mice showed greater hearing loss compared to the wild type mice. Thus, we suggested that cochlin’s auditory protection may be linked to its anti-bacterial action. Also, we specified that cleaved LCCL domain is the mediator of such protective role. LCCL within the perilymph of explants of the inner ear increased after infection and, more surprisingly, injection of LCCL to the Coch knock-out mice induced improvement in the hearing loss.

We elucidated two main mechanisms by which LCCL released in scala tympani regulates immune response (Fig. 2) (8). First, LCCL recruits innate immune cells by increasing the expression of pro-inflammatory cytokines such as IL-1β and IL-6. The infiltrations of neutrophils and macrophages were increased in the wild type mice, compared to those in the Coch knock-out mice. Specifically, the number of monocyte-derived macrophages distinsuished from resident macrophages based on morphology, significantly increased in the wild type mice. This implies that the recruitment of the innate immune cells within the blood vessels is facilitated by the LCCL. Addi-tionally, we found that LCCL physically interacts with the pathogen. Previous studies reported that LCCL do not directly interact with neither bacterial molecules such as LPS, pattern recognition peptidoglycans, nor the bacteria (13, 17). Our study also found that the viability of PA was not impacted by the addition of the recombinant LCCL peptide (8). However, by examining the growth of the bacteria on glass coverslips, we reported that the presence of LCCL markedly affects their growth pattern. Compared to the normal condition, the treatment of LCCL increased numbers of globular shaped colonies that co-localized with LCCL. Scanning electron microscopic images additionally confirmed bacterial aggregation and entrapment. This physical interaction was also observed in the gram positive bacteria, e.g. , indicating the interaction is not mediated by the LPS. These two mechanisms successfully explain how the immune response within inner ear is regulated in a way that prevents damage to the core auditory structure, or the organ of Corti. As most of the bacteria enters the inner ear through the round window, adjacent to the scala tympani, the initial immune response likely occurs within the scala tympani (5). Thus, physically containing the bacteria within the scala tympani while inducing innate immune cells’ recruitment is logical in preventing further progression of the infection to the scala media, wherein the organ of Corti lies. 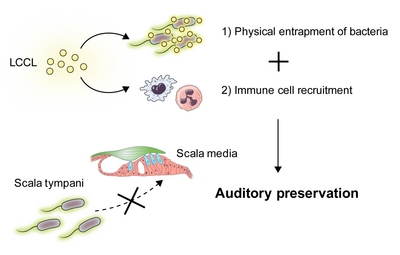 Figure 2. Cochlin is the dual-armed immune-regulator of the inner ear. The inner ear is a delicate structure enclosing the key auditory structure, organ of Corti. Since excessive immune reaction can easily damage the normal architecture, the immune response should be fine regulated in the inner ear. Cleaved cochlin LCCL mediates such regulation in two ways. First, it controls the range of inflammation by physically entrapping pathogens in a limited space. Second, it recruits innate immune cells allowing clearance of the pathogen. Such dual-armed regulation of immune response makes cochlin a crucial component in auditory preservation.

In this review, we discussed the immunological role of the cochlin and how the innate immunity within the inner ear is delicately controlled by the cochlin. The LCCL domain is cleaved from the full-length cochlin by aggrecanase I after infection. The LCCL domain then acts as a systemic modulator of innate immunity by up-regulating the expression of pro-inflammatory cytokines such as IL-1β and IL-6. In the inner ear, the LCCL controls the range of inflammation by physically entrapping pathogens as well as inducing the recruitment of innate immune cells. In conclusion, cochlin, long known to be linked with auditory function, protects the core sensory structure from infection by inducing the needed immunity while limiting excessive inflammatory damage.

Cochlin is currently studied in various areas of medicine. It is linked with glaucoma, autoimmune disease of the inner ear, as well as the DFNA9 syndrome mentioned above (18, 19). Since the exact mechanisms how such defects occur are elusive, further research must be conducted. The clinical use of cochlin is currently very limited. Ikezono . suggested the use of cochlin-tomoprotein, an isoform of cochlin, as an effective diagnostic tool for perilymphatic fistula based on its limited expression in the inner ear (20). Based on our findings, the clinical use of cochlin may expand further as a potential therapeutic for hearing loss from infection, e.g. chronic otitis media.

This study was supported by a National Research Foundation of Korea (NRF) grant funded by the Korea government (2019R 1A2C2008481 to Y.-M.H.)

The authors have no conflicting interests.